US financial markets fell from record-high levels as increases in inflation continued to weigh on investor sentiment.  The tape was full of corporate news highlighted by the break-ups of General Electric and Johnson & Johnson, the record IPO of EV manufacturer Rivian, and the slide in Tesla’s share price induced by CEO Elon Musk’s sale of five billion dollars of stock.  Geopolitical news was also prevalent throughout the week.  In China, General Secretary Xi Jinping’s Historical Resolution was passed by the communist party, ensuring him a historic third term as General Secretary.  In Washington, President Biden touted the Bi-partisan passing of the Infrastructure Bill, which will be signed into law on Monday.  However, support for the Reconciliation Bill paused as the CBO announced that it would not have a score on the bill until after Thanksgiving.  In Eastern Europe, Russia continued to amass troops along the Ukrainian border while US warships sailed into the Black Sea.  Economic data for the week painted a more permanent picture of inflation which has continued to affect sentiment indicators. 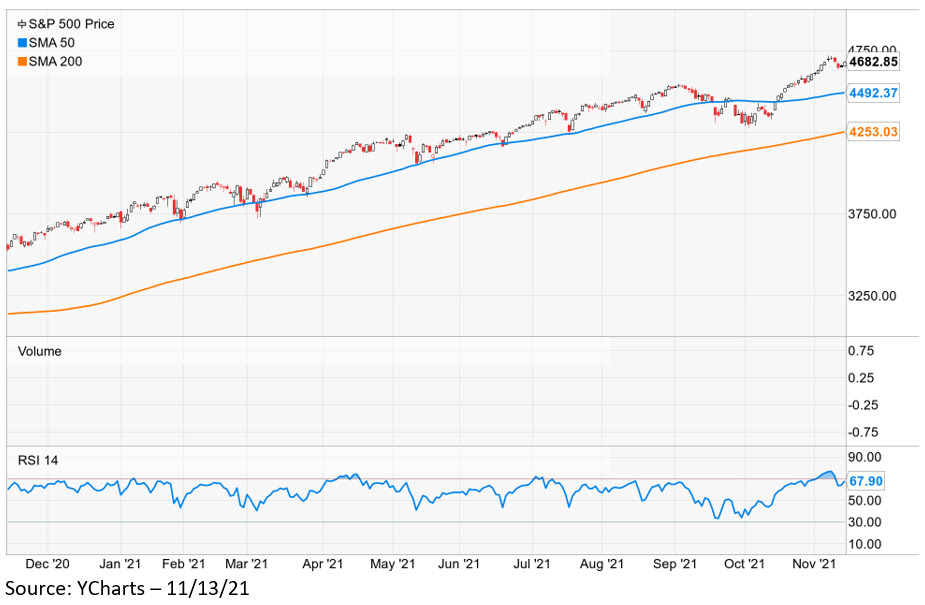 Economic data for the week was a bit disappointing.  Investors were focused on inflation data.  The PPI or Producers Price Index was slightly better than expected, with the headline number coming in at 0.6% versus expectations of 0.7%. Core PPI, which excludes food and energy, was better, coming in at 0.4% versus 0.5%.  At the consumer level, CPI or Consumer Price Index missed the mark in a big way.  The range in expectations was very wide, but the results were higher than the largest estimate. Headline CPI came in at 0.9% on a month-over-month basis relative to the consensus estimate of 0.6%.  On a year-over-year basis, consumer prices increased 6.2%, the highest level since 1990.  Core CPI was also hotter than expected, coming in at 0.6% versus the consensus estimate of 0.4% and on a year-over-year basis grew 4.6%.  Rent increases were notable in the report and are a component that will likely continue to increase over the next couple of quarters.  Small Business Optimism fell short of expectation, as did the preliminary reading of the University of Michigan’s Consumer Sentiment, both of which pointed to inflation as the primary reason for the declines.  On the employment front, JOLTS job openings were slightly lower than the prior reading but still encouraging at 10.438 million.  Initial Jobless claims came in at 267k while Continuing Claims ticked up a bit to 2.16 million.